Something interesting from Beale Paddles

Here's a bespoke hand line setup from Beale Paddles you might want to check out. 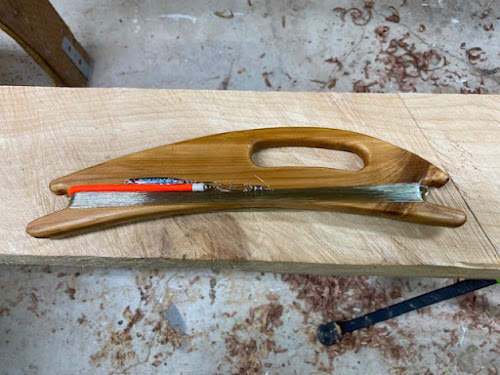 When putting together an optimum handlining rig for trolling the first thing you need to factor in is what exactly you want to catch. For instance, if you want to catch mackerel your rig would look something like this. 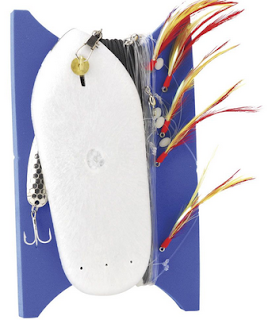 In my experience, this rig seriously rocks and is a perfect example of a highly evolved trolling rig for fish like mackerel, bass, pollack, and pretty much anything you'll come across in that general fish under ten pounds zone. That said you'll mostly catch mackerel and, more often than not, a LOT of mackerel.

While highly evolved the rig is really dead simple. Some line (net seine is my choice) followed by a planer to get the line down a bit with some (three to six) mackerel feathers on a monofilament leader with a spoon or small lure on the end.

Did I say this rig was deadly? While sailing in the English channel our biggest problem was that we were catching too many fish and it seemed that every time we put it in the water we'd have six or seven mackerel on the line.

Seriously, this rig will have you looking for a "101 Recipes for Mackerel" cookbook.

Of course, while this is a great rig for mackerel it's hardly the thing to drag behind your boat when looking for pelagic species like Wahoo, Mahi, and Tuna which are on a whole different scale.

While sailing in the Med we mostly targeted Tuna and down here in the Caribbean we tend to look at Mahi as our fish of choice and gear up accordingly.

One issue you'll need to address is what size of fish do you actually want to catch. Face it, most of us folk on sailboats don't have huge freezers or the ability to process more than a finite amount of fish so knowing the size of fish you're able to process and looking to catch is important. In our case, anything over twenty pounds starts being problematic while on passage so we optimize our rigging for fish towards a twenty-pound or so target range.

Yeah, I know of some cruisers who catch big Tuna, Marlin, and Mahi then grab some filets while dumping the rest of the fish overboard which is a practice we find abhorrent. Our preferred method is to release any fish larger than our needs but in most cases, the best practice is to target smaller fish whenever possible as catch and release often causes physical harm as well as being highly stressful to the fish.

More on the subject of handlines for trolling later.

Some thoughts on handlining from a sailboat...

A while back, a friend asked my opinion on the best rig for handlining from a sailboat which at first glance seemed like a simple request. Seriously, how can you improve on some line with a hook on the end? 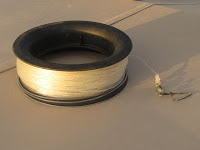 The funny thing is that the more I thought about it the more complicated the request became. So much so that I found the various permutations of the sailboat + handline = X equation started keeping me up at night. More importantly, it also got me to re-examine my standard any fool can fish advice which was meant to be a first step rather and never meant to be and end-all on handlining gear and technique.

Part of the problem is that, with a bit of thought, the oft given advice of throwing 200 or 300-pound test line on a Yo-Yo with a lure on the end is hardly an evolved system and actually flies in the face of most other fishing method's best practices.

For sure, that Yo-yo loaded with 300-pound test line and a lure is evolutionary more advanced than fishing with a club but not so much as you'd actually want.

We can do a whole lot better but, to do that, we'll need to get back to basics and a clean sheet of paper but more about that later...
Posted by RLW at 11:11 AM No comments:

Something you'll want to read...

Dave Z  (the Triloboat guy) has a post on Fishin you might want to check out.
Posted by RLW at 10:33 AM No comments:

Fish & Save happens to be my go-to place for affordable fishing gear as they often have great sales. As it happens they currently have a sale on lures... 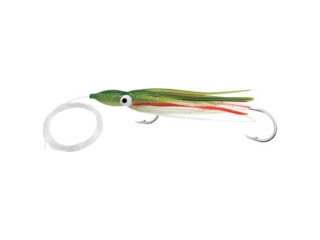 This rigged squid for example often goes for eight dollars or so at places like WEST marine and suchlike. While Fish & Save list their retail price at $3.49 but sells them for $1.99 and currently has them on sale for $1.47.

Hey Skipper is an excellent resource with a lot of rock-solid content that you might want to check out. This inexpensive rig is a good example and just the thing for fishing from your sailboat or dinghy.

Here's something you may want to add to your quiver... 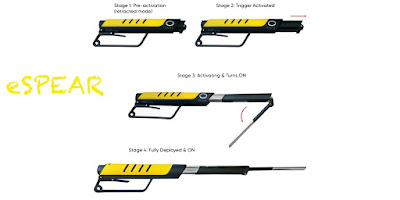 What the hell is it you might be asking?

The eSpear is an electrical shark deterrent. Better yet it won't hurt you or the shark.

Neptonics has all of the needful info...
Posted by RLW at 11:30 AM No comments:

RLW
I'm never sure whether to describe myself as a film maker who sails or a sailor/boatbuilder who makes films...Either way I'm a pretty happy camper when all is said and done.